There are two reasons why people separate themselves from the crowd: they are either bold leaders or timid followers. The rest of the herd sticks together.

Bold leaders move toward obstacles and do not let hesitation or doubt impede their progress. Timid followers lurk behind because they are afraid of obstacles and look for ways to avoid them.

As a counterintelligence agent, I looked for both personalities in the targets I attempted to recruit to work for the US government. The blue flamer often rushed ahead; they could be a good target if they failed to use good judgment. The slackers represented the other end of the spectrum; they were timid souls who always looked for the easy way out. Often, that meant cooperating with the FBI.

There is a saying in the FBI: No arrest goes according to plan. Agents know better than anyone that circumstances can change without warning. It’s essential that a leader is able to adapt and make effective decisions under pressure.

A leader’s success, in any environment, is based on their ability to manage the risk that presents itself. Simply stated, bold leaders understand how to exploit and mitigate risk; this is why they are more successful.

Bold leaders are not pushy, loud or bossy. They do voice their opinion, take charge, and energize the rest of the team.

Let’s take a closer look at the 5 reasons bold leaders are more successful:

1. They hide their weaknesses

Everyone has weaknesses, so it’s stupid and counterproductive to not acknowledge them, at least to yourself. It’s also to your advantage to become equally aware of your strengths. An awareness of your strengths and weaknesses allows you the opportunity to approach a volatile situation with a strategy that places your best foot forward.

When you appear as a bold leader, your weaknesses are hidden behind the actions of someone who is confident of their strengths and is making use of them.

2. They know perception is reality

As a kid who grew up on a remote cattle ranch in the middle of Wyoming, I watched as predators snuck up on the hesitant prey. I learned early in life that once you hesitate, you show yourself as weak and expendable.

The way people perceive us, by our actions and the words we use, will guide the way they treat us. If we present ourselves as victims, guess what? That’s how we’ll be treated! It doesn’t take a rocket scientist to figure this out: if you indicate a lack of confidence in yourself, it will bring out the tiger in your competition.

Authors have described the recruitment of foreign spies as an act of seduction. More often, it is the stealth of a snake that has circled his prey long enough to know when to strike.

In the same way, bold leaders learn a great deal when they sit in silence during negotiations and listen to others. They make no sudden move to intimidate or alarm the challenge that sits before them. All the while, however, their mind works to identify the best way to disarm the opposition and sway the negotiation toward a more favorable outcome.

Bold leaders do not make rash decisions. They maximize their chances of success and investigate the challenge before they make a decision.

4. They create an environment of continual improvement

Continual improvement demands that bold leaders feel comfortable holding the tension between failure and risk. They learn how to use risk to their advantage and, at the same time, mitigate catastrophic risk so they can protect their team.

No one is comfortable with failure, but it is the flip side of success. They are two sides of the same coin. Bold leaders do not back away from failure. Instead, they learn from each iteration and apply it to the next challenge.

Continual improvement and innovation challenge existing practices. They also produce energy and adrenaline. They allow each team member to think in fresh ways about ways to accomplish a goal. Bold leaders are not afraid to reward a team’s insightful experiment, even if it is a failure. This will help you create partnerships within your team to help them learn and reboot from their failure.

Bold leaders seldom act in extremes; they are not risk-adverse, nor are they careless. They strike a balance between the two. They don’t sit around and wait for the perfect opportunity before they step in because seldom exists an opportunity with no risk. Instead, they make the most out of their circumstances. They have mental toughness—they believe they will prevail in their circumstances rather than expect their circumstances to change.

Successful people tend to look for the small wins in every situation. The power of positivity leads to consistent small wins. Each small win spells success. Success not only attracts others, it provides momentum. 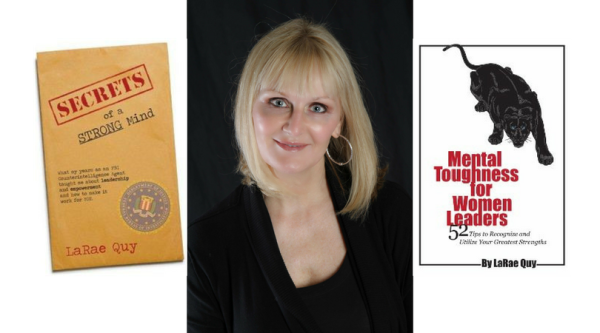 LaRae Quy was an FBI undercover and counterintelligence agent for 24 years. She exposed foreign spies and recruited them to work for the U.S. government. As an FBI agent, she developed the mental toughness to survive in environments of risk, uncertainty, and deception. Quy is the author of “Secrets of a Strong Mind” and “Mental Toughness for Women Leaders: 52 Tips To Recognize and Utilize Your Greatest Strengths.”

If you’d like to find out if you are mentally tough, get her free 45-question Mental Toughness Assessment.