The danger of the overconfident leader

For leaders, it pays to be confident. Spend a few minutes on the internet and you’ll find that confidence is viewed as the cornerstone of leadership and a leader’s best friend. There is plenty of information on the secrets of confident leaders from history and in business, and lots of tips for being a confident leader. And if you’ve got money to spend, there’s no shortage of ‘experts’ who’ll show you the path to greater confidence.

Perhaps this focus on confidence should not be too surprising. According to research, we tend to give an ear to and trust more fully those who project confidence and  sound more authoritative. Whether you’re establishing your own expertise, spearheading a political campaign, or leading a company, speaking and acting with confidence has undeniable benefits.

This would be fine if confidence was the same thing as ability, but unfortunately it isn’t. Confident people can and do make mistakes. For instance, in 1876, Western Union passed on an opportunity to buy a patent on the telephone as it had “no commercial possibilities”. And when Kodak invented the digital camera, it sat on it out of fear that it would eat into profits from their film business, and Lehman Brothers engaged in massive borrowing right before the market crashed. In retrospect it’s easy to see the mistakes, but at the time these likely seemed like solid decisions. Sadly, we are all prone to biases in our decision-making.

For leaders, one of the most precarious traps is the “overconfidence effect” where self-confidence outstrips ability. For example, consider a 1981 study in which 93% of US drivers said that they were ‘above average’. This is of course an objective impossibility, as by definition 50% of any large group of people should be above average. Yet, as the study showed, at least half of us tend to overestimate our abilities in that area—leaders are no different, and this can have severe consequences.

In fact, some of the worst leadership decisions have come about through overconfidence. Research shows that as we have less acumen on a subject or in an area, we have more confidence in our ability and decisions. This phenomenon is so common that it has been given a name – the Dunning-Kruger effect. Leaders are likely to make the most imprudent and reckless decisions in the areas where they have the least knowledge and ability. While programs that fall closer to their areas of expertise may be scrutinized closely, grand projects outside of their sphere of expertise may be practically rubber-stamped.

This is a bleak picture, and it gets worse. The negative effects of overconfidence are often worsened by group think. In the rush to make a decision, data and opinions that run counter to the line of thinking put forward by the leader are glossed over. Retrospective analyses of failed projects often reveal that concerns were in fact surfaced in earlier stages early on but ignored, with those who signalled the red flags being marginalized or excluded from final decision making. Leaders can become presumptuous, assuming they know more than anyone else and ignoring the warning bells when things are going downhill until they’re past the point of no return. In fact, an entire body of research devoted to hubristic and narcissistic leadership shows that even beyond the tendency to ignore such input from others, their presence stifles discussion and exchange of information within teams and organizations. When the situation that they’ve created finally boils into a full-blown crisis, the same reluctance to listen to contrary voices that got them there in the first place can cause them to fail to acknowledge that things have gone wrong and that that a new approach is needed. Since voices of concern of failure were stifled, no one ever discussed a ‘plan B’ that would be enacted in the event of failure. It’s perhaps informative to note that  research also demonstrates that men are more likely to be overconfident about their abilities than women, even in cases where women have an objectively higher level of ability–an phenomenon which may have the effect of further reinforcing the glass ceiling. 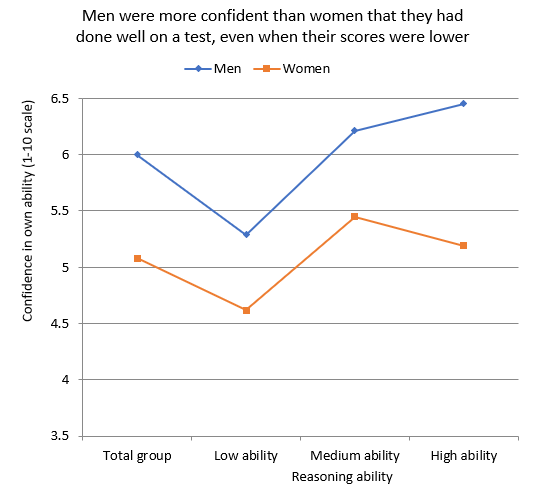 There is a way to overcome these challenges: creating more self-awareness in leaders and their teams. By becoming more aware of their personality, behavioural style and biases, people can make more informed decisions, and overcome the effects of groupthink. Leaders can appreciate their own strengths and limitations and begin to see the value of alternative views. This more accurate self-perception, it turns out, results in better performance, as was demonstrated recently in a study carried out in the Royal Navy found that more self-aware leaders were better at adjusting their leadership style to the current reality.

Unfortunately, self-awareness isn’t common; research by The Eurich Group suggests that only 10-15% of people can be described as ‘self-aware’. Fortunately, there are many ways in which leaders can increase their self-awareness (coaching, for example) within themselves and their organizations, but one of the most cost-effective is the use of personality questionnaires such as the Myers-Briggs Type Indicator® (MBTI®) assessment. Activities such as these can help create a culture and foundation for people first to understand themselves and why they think and act in certain ways, and then to understand how the differences between themselves and others can provide a positive basis for action. A leader can then grow their awareness of how their personality shapes one-to-one interacts with others to an overall knowledge of how to work more productively with their teams.

It often seems as if confidence, or even just the appearance of confidence, is regarded as a virtue in-and-of-itself, and that overly positive thinking is prized at the expense of an objective appraisal of the facts. This makes it critically important that business leaders learn to recognize groupthink for what it is, and avoid confusing confidence with reality.

John Hackston, head of thought leadership at The Myers-Briggs Company, is a chartered psychologist with more than 30 years’ experience in helping clients to use psychometric tests and questionnaires in a wide range of contexts including selection, leadership development, performance management and team building.