Entrepreneur and brand guru Ryan Smolkin is on the cheese curd and gravy-train fast track with Smoke’s Poutinerie, an innovative fast-casual concept featuring the Canadian specialty of poutine with over-the-top toppings and lumberjack-meets-glam-rock style. The concept is 100% franchised and has 150 locations with many more deals in the works.

Smolkin does a “rock ‘n roll stage show” about Smoke’s that has him in-demand on the speaking circuit. We chatted at the Fast-Casual Executive Summit this October in Nashville, where he was a presenter and stood out with a distinctive lumberjack-aviator-rock-n-roll mystique. 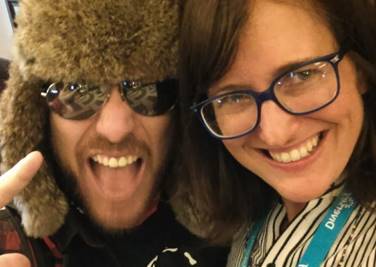 What is your proudest accomplishment?
Just the growth and the speed we’ve been going. I’ve been an entrepreneur my whole life. Since I was a kid, I had all my own businesses including property development, and I had a branding and design company for 11 years. This little puppy is on track for global domination, and the speed which we have been able to do it and bringing in the right people and having them around me is exciting.

I’m proud of it, but if you are a true entrepreneur, it’s not about the money. If it were about the money, I would have been done a long time ago, because, it’s all cash outflow. It’s about building the business and seeing the expansion and the growth. That’s what gets you pumped. 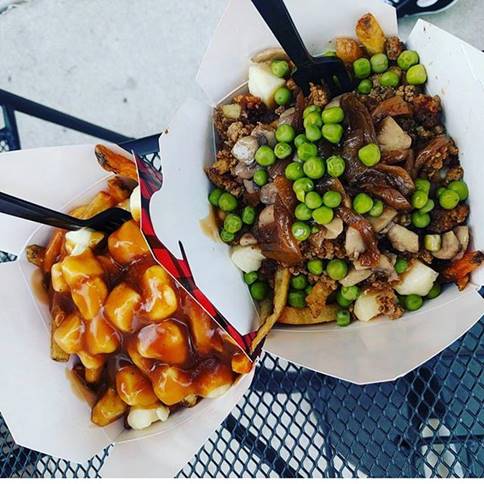 Where do you usually do the full rock-n-roll stage show about Smoke’s?
All over North America. I haven’t gotten to take it outside. Eventually I’ll have to take it for an excuse to take it through Europe or through Asia or Middle East. I’ve presented at every type of conference you can think of. In a couple of weeks, I am guest speaking in Charlottetown, P.E.I., the home of potatoes in Canada. I’m at a potato convention to bring potatoes to the next level.

I go to university settings with graduating students to talk about building yourself, building a brand, starting your own business. I talk about start-ups, entrepreneurship, success, and motivation. I’ve spoken to other franchisors, believe it or not. I’ve spoken at six or seven franchisors, even on the food side of franchising, which you would think is pretty whacked out. Why would they bring another food franchisor into their conference to preach brand and building a brand? But when you do it, you realize there is not much difference is doing it with anybody else, and I’m not there to steal anybody’s thunder or steal a franchisee. It’s just to get everybody rocking and rolling.

I think it would be quite a rush to be one of the presenters at this conference.
It was good because I’m usually a guest speaker doing a one-hour rock-n-roll stage show. When you are on the panel, you think you get kind of demoted just a bit, but I don’t consider it a demotion because I was on stage with some top-level dudes [Scott Ford, President of Goodcents Franchise Systems, and Patrick Renna, CFO, Wahlburgers]. I mean these guys know their stuff inside out, and I know my brand inside out, so that’s where I can talk at the same level as them. So, I love the panel discussion. I’ve done a bunch of them, but I truly prefer taking the stage and doing the rock-n-roll stage show. But it was awesome. They let me do the panel and a partial stage show. The couldn’t keep me in my seat. They tried to strap me down and put the seat belt on. I had to bust out and take the stage and toss around a few hats. 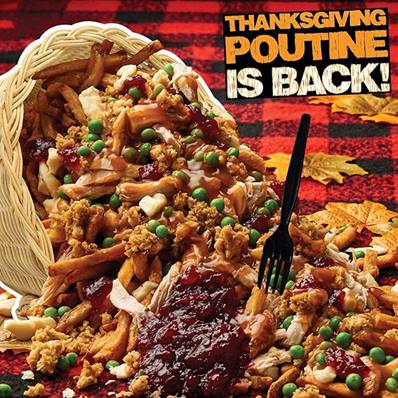 Were you a speaker before you got into doing the rock-n-roll presentations about Smoke’s? Not a speaker, but I was always kind of an entertainer because I had a branding and design company and I had branding and culture in mind. The biggest thing that came out of that was not speaking but it was more vision and values because I created vision, values, and mission statements for so many companies, especially Smoke’s Poutinerie.

Amoeba Corp. was a branding and design company I owned. Every part of our brand and what goes with it --- Canadian lumberjack, 80s glam rock and hair bands, everything comes from that. It’s evolved a lot in the last few years because you need to have some cred and a story to tell before they let you start speaking. Now I’ve got a story to tell, but I’ve had to scale it back a ton on the number of venues because I must make it part of strategy now. It’s not just going out to speak at random. I’m not in it for the money. That’s not the driver, and I don’t want to lose focus on the core business. It’s weaving it into the strategy and the brand and culture. 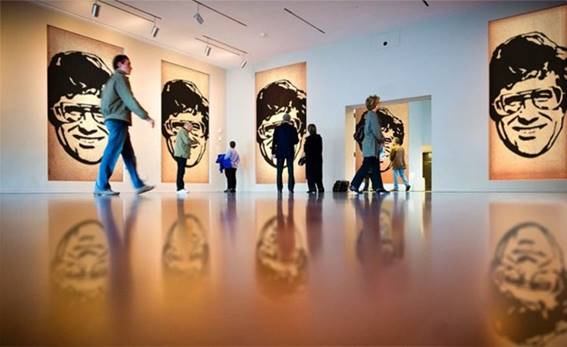 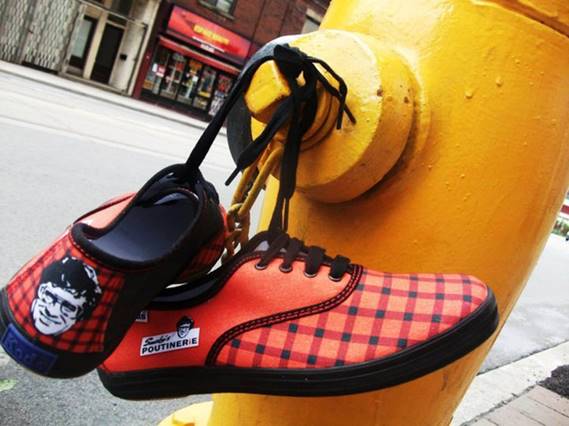 What are you most excited about right now with the company?
The growth and the brand power. It’s amazing. And I don’t mean that in an egotistical, cocky way. We are on a huge growth spurt. With that comes the headaches that go with it, but the nicest part of it is brand power. For example, the Smoke’s Poutinerie World Poutine Eating Championship. All proceeds from that go to charity. We have one charity we are intimate with. We are friends with We Care, which sends disabled kids to camp. We have raised hundreds of thousands of dollars for it. I didn’t realize that brand power until a few years ago, the second year we were doing the event. We brought other brands on stage, Coca-Cola, and Maple Leaf Foods. We did a CEO eat off, where we do our own challenge, so it’s crazy. It was all pledges, all sponsorships, all brand power.

Same for the convention we are doing, we are getting sponsorship. All our suppliers, all our vendors and partners, I like to call them, because that’s what they truly are, long term partnerships. That’s the power of our brand and how they see us, working with those Coca-Colas, working with distribution companies. It’s exciting to leverage the brand, all the way down to our meats and our potatoes. It’s exciting what we’ve been able to grow. And then to go on stage and still have people look at you like you are all weird, but at the same time accept who you are and that you kind of know what you are talking about.

You’ve got style and you’ve got substance.
Yeah, when I do my presentations especially, I’m weird, wild, and wacky, but when it comes to Q&A, I can get peppered with any question and I can rhyme off stats, I can rhyme off our numbers, I can talk about our growth, anything you can think of without even thinking twice. I run the whole show. I portray myself as the mascot. 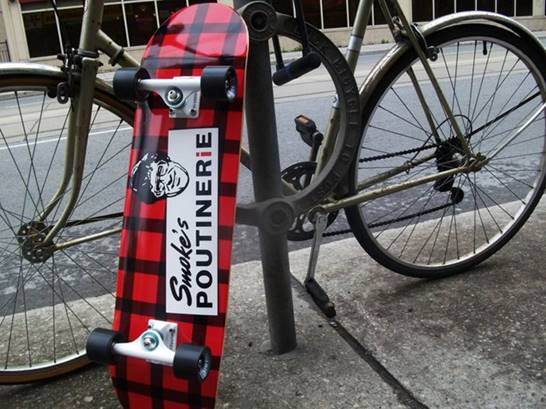 What do you look for when you are recruiting people for your team?
Total team player. I think you know from my brand, team player takes on a whole new meaning. You are wearing that plaid and proudly sporting Smoke’s gear. Everybody at our global headquarters is wearing the plaid. Everybody knows Smoke [the mythic logo of the brand] and where he’s been. They haven’t gotten a chance to talk to him yet. But after 10 years of loyalty to Smoke’s Poutinerie I told them they will get to have a phone call with Smoke, and after 20 years they may get to have a lunch with Smoke.

It’s not just a finance or marketing role or a franchise service rep. It’s brand and you must match the brand. It’s a tough one to fill. You met Mark Cunningham, our Global Development Officer. Mark is a seasoned veteran. You can tell the dude lives and breathes the brand. He’s proud. He’s got the red shoes. He’s got the plaid cap. He loves it. He preaches it. It’s tough to find, but you can do it. 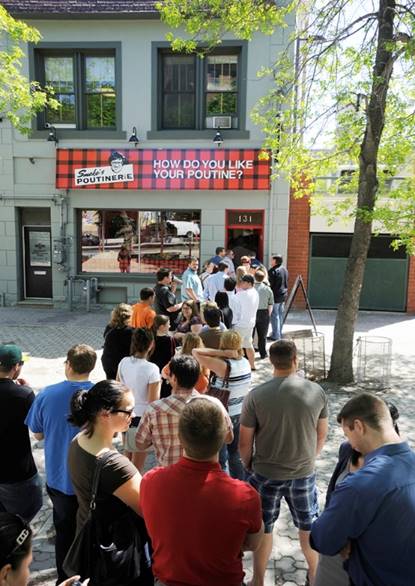 What do you for fun when you are not working?
I have twin 11-year-olds. The rest of my world evolves around my boys. We like to do every sport you can think of, hockey being the big one, being that we are from Canada. I travel with them all over to tournaments and games. Big into soccer. Big into movies. They are wild and crazy dudes. I’m the quiet one around them.

You must be able to step outside of that personal zone, that protective shell, to get the point across that you are trying to get across. That’s about the only advice I can strongly give. When you hit the stage, no one knows you, and you can become anyone you want. You can be the ultimate entertainer of all time. You are the ultimate entertainer of all time. You just are. But if you are not going on stage thinking that, no one is going to believe it. Then go for global domination.